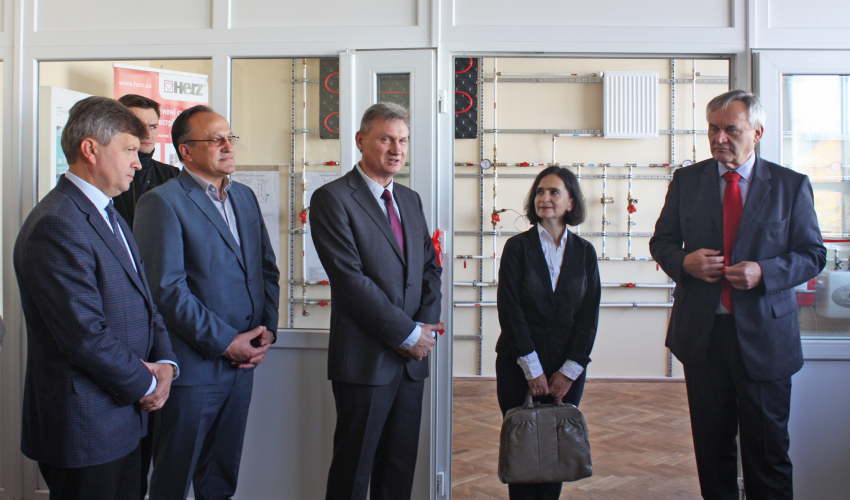 A new training laboratory was opened at the Department of Heat and Gas Supply and Ventilation of the Institute of Building and Environmental Engineering.

The event took place on October 11. Austrian company HERZ Armaturen made a gift to Lviv Polytechnic – a laboratory stand reflecting the use of thermostatic and hydraulic control valves in energy-efficient heating systems. The gift is the result of many years of cooperation between the university and the company. The creation of such a laboratory in Lviv University was initiated by the Austrian side.

As part of the celebration, Dr. Gerhard Glinzerer, CEO and owner of HERZ Armaturen, arrived at the university. The guest paid a business visit to the rector of Lviv Polytechnic, Professor Yurii Bobalo, during which a memorandum on the laboratory stand transfer to the university and the intentions of further cooperation was signed. Dr. Glinzerer expressed readiness in future to facilitate and support Lviv Polytechnic in every possible way. In the future, the workshops by HERZ employees are planned for Polytechnicians, as well as the possibility of student internship at the company.

Gerhard Glinzerer and Vice-rector of University Oleh Davydchak conducted a ribbon-cutting ceremony. After that, the guest expressed hope that the laboratory opening would deepen the cooperation between HERZ Armaturen and Lviv Polytechnic, as well as between Ukraine and Austria. Vice-rectors Oleh Matviikiv and Volodymyr Davydchak, Director of IBEE, Professor Zinovii Blikharskyi, scientific and pedagogical staff of the HGSV Department and other guests came to share this joyous moment.

At the end of his visit to Polytechnic, Dr. Glinzerer told University students and lecturers about the HERZ Armaturen company that in 1908 began its activity in Lviv, Ukraine. According to him, lots of the old Austrian buildings on the streets of our city are equipped with heating systems of the HERZ company, and they are still functioning.